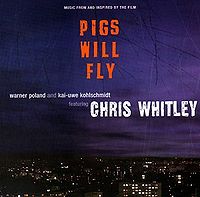 Eoin Moore posted the following to the Dust Forum:

I directed the movie Pigs Will Fly and had the extraordinarily rare pleasure of meeting and working with Chris. To answer the question: The film will hopefully make it to DVD in the coming months – the distributors have been promising now for an age. The film was a German “art house” independent project about a guy in Berlin who is domestically violent and after hospitalizing his wife goes to San Francisco to visit his brother and reflect upon his life. His brother, who shared the same upbringing but went a very different way, helps him to look in the mirror and consider his problem. The film is in German with some English. I guess it will be subtitled on the DVD (whenever it comes out…).

The story with Chris was quite strange, like a stroke of fate. The lead actor, Andreas Schmidt, had been a fan of the great poet for several years and he played “Perfect Day” one night when we were rehearsing at his place. It was about two months before the shoot in 2001. Once I heard the first words of “Spanish Harlem Incident” I was hooked. I got most of Chris’ albums within a week and heard his music wall to wall right through to our departure to San Francisco.

It was a weird time in SF, particularly because 9/11 was 8 days after we arrived. But then a week into the shoot Andreas saw that Chris would be playing in SF, (the Rocket House tour) so we went to see him. During the concert we told ourselves – Chris’ music would be sooo good for this movie. I tried to talk to him after the concert but he was whisked away by his tour manager and all I got was an autograph on my CD! Filming continued back in Berlin four weeks later and in the middle of the shoot Andreas again announced – Chris live! This time in the Knaack Club in Berlin! So this time we went along with the whole film crew (who had been converted to CW-fans during the shoot) and a letter explaining our film and that we would love Chris to “donate” a song or record something for the soundtrack.

Chris called me two weeks later, apologising profusely for the delay. He’d been in London etc… I was just amazed and delighted he had called at all! He said he was honoured (that’s the man he was, humble and generous) to be asked and yes, he would be delighted to get involved. The major coincidence was then apparent: Chris had just moved to Dresden, which is two hours from Berlin. And I thought we’d need to fly him in from New Orleans or New York!

Within three days I was in Dresden with Andreas (his dream come true) and we had our first chat with Chris, showed him some excerpts from the movie etc. I hooked him up with my soundtrack composers Warner Poland and Kai-Uwe Kohlschmidt and they got to work. I had the pleasure of sitting in on several recording sessions and had a few lovely evenings with Chris. He created some magical, beautiful poetic music for my film, something I will be eternally grateful for.

I remember when I first heard the song for the end of the film – a very important piece of music for the film – Chris had written it that morning on the train to Berlin. Warner played the recording “Bridge Song” and the tears just flowed down my face. It was pure poetry, my absolute favorite Chris Whitley song ever. It wasn’t easy for Chris’ free musical spirit to write and perform a song to fit a picture edit, I know. I hated to tie him down like that, but Jesus, this one was on the nose. The timing was amazing and the song breathtaking. I was honoured that another song “Breaking Your Fall” became part of Chris’ regular repertoire and I was in tears yet again when he played it live in a concert in Berlin years later.

Yes, Chris was one of those very extraordinary people who touch everyone around them like a magic wand. Kai-Uwe became a close friend of Chris and they performed and recorded and talked together ever since. Chris made many friends here in Berlin and has a very solid chunk of my heart with his name engraved on it.

The soundtrack to Pigs Will Fly has several songs composed and sung by Chris. Others are composed by Kai-Uwe and Warner and sung by Chris. Then there are various instrumental elements and a couple of songs by Kai-Uwe and Warner without Chris’ voice. It is a beautiful soundtrack, a priceless gift to a film maker like myself. I am so honoured and touched to have encountered that beautiful man. I have cried daily since Chris passed away and my thoughts are with Trixie and Susanne who I met, and with all those friends and relatives I never met. Thank you Chris – I give you that little two-fingered whistle you always used when you introduced the band on stage.

Kai-Uwe, along with Warner Poland, wrote much of the score for Pigs Will Fly.  In a comment to the ATCW group, Kai-Uwe shared the following memories of working with Chris and described the deep affinity he felt for Chris and his music:

Warner Poland and I are the longtime composers of Eoin Moore. For the movie “Pigs will fly” Chris joined us and it was an extraordinary encounter. He was such a sensitive, lovable and humorous person. A real artist, uncompromising and full of respect for art itself, for his colleagues, for anyone who was serious about it. We had lots of fun.

During the production, Chris lived with me in my studio in Berlin. Here we developed songs and in Warner’s studio, which was a bit bigger back then, we produced everything. Most of the time, Warner or I would provide basic compositions and Chris would modify them to suit his style. Then he wrote the lyrics and we jammed the music onto the tape. It was six intense weeks. Chris also had nice freaks at night. Gentler. I always thought I was in Oliver Stone’s Doors movie.

At the end there was a dinner by the film company and Eoin suddenly asked what piece of music we had actually written for the final scene. The important scene on the bridge in San Fransisco. Suddenly we were all aware that there was still a piece missing. We still had three days until the main mix. That same night I composed the basics for the “Bridge Song.” To suggest a melody to Chris, I sang all the lines in pseudo-English. A few real English lines had even come out. Pure coincidence and of course the unifying subconscious.

The next day Chris got up and wrote the lyrics and arranged his guitar on the song. For me, too, it is one of his most beautiful songs, and I was overwhelmed when Chris took over a few lines of text from my gibberish. I call those, as he himself said, the most important and prophetic “Love is your sister, and death is your brother.” Two more days to the main mix. The next day we were at Warner’s studio and Chris sang the “Bridge Song”. It was breathtaking. We decided to leave it pure. No other instruments, just Chris his vocals and his dobro.

On the last day before the film mix, Eoin came to the inspection. When the song started, I was suddenly very afraid that it was too rough. But when it died down, we all had tears in our eyes. I always have “Pigs Will Fly” in my heart; it turned out to be a wonderful film. Our friendship with Chris had a spiritual depth. Shortly before he died, we talked on the phone and joked that we would soon be going on tour. On the night of his death — my family and I were now living at Schwielochsee, a bird screamed over and over again. I knew Chris was saying goodbye to us. I hear his thunderous laughter forever and see his big, knowing eyes. A wonderful friend.

Given that this album is out of print and so difficult to find, I’ve decided to violate my no-posting-copyright-materials rule.  Chris’s songs on this album are so gorgeous that hearing these lo-res versions may inspire you to scour the interwebs to find the original CD soundtrack.  I should note that the album’s first track, the full version of Crystaline, is not included here, but – believe me! – that track alone is worth the effort and $$$$.

The complete album (including its hidden track) is posted below.  Please note that the album is a collaboration of three composers:  Chris, Kai-Uwe Kohlschmidt, and Warner Poland.  The full album credits (including Trixie’s backing vocals on Velocity Girl and Heiko and Matthias’s vastly combo-ing on Velocity and Fine Day) are shown in the scan of the CD insert.

Lyrics (as near as I can make out)

Frisco
Over the hills and far away
the whole world (no world ???) is confined
meeting the stone at the golden gate
man will live he don’t mind
Up in the air the buildings rise
glamorized allure??? (something that rhymes with “blood )
Sixteen lanes of compromise
to recall your mutual blood

Bridge Song
Waking up running
from the (full of?) confusion
someday soon you’ll be taking off
the time is for falling
and all its intrusion
nothing new now you’re taking off
an everyday gesture
to question the living
the bridge of sighs
there’s power and motion
forever is calling
to raise the day before your eyes
in numbers and letters
sisters and brothers will pick you up
and dust you off
Can you feel the passing of heaven
lifting you across
the strange divide?
Love is your sister
and death is your brother
no bright definition
so always to wonder
and always to want
this fine imprecision
where (when?) nothing is written
and nothing is lost
someday soon you’ll shake it off
shaking the errors
awaking the brass
someday soon you’ll be taking off
Can you feel the passing? the heavens
lifting you across
the bridge of remorse
Love is the axis of true revolution
anyway there is time enough
you never can lose it and never be bought
anyway, you pay it off
where (well?) love is your sister and death is your brother
put wings on your shoes

Clips from the Film

Crystaline:  This clip provides a bit of insight into the movie’s title!

Frisco:  Walter greets Laxe at San Francisco airport and drives into the city.

12 thoughts on “Pigs Will Fly: Playlist and Movie Clips”