The thing I hate most about Facebook as a host for our group is that the now thousands of posts are presented linearly – no feature to allow the user to group posts by topic (e.g., as one would in a discussion forum), to create a chain/thread of related posts, or to easily/quickly access posts from last month or last year.  Fortunately, if one is sufficiently lucky and patient and has a reasonably good memory, it may be possible to find an old post using the FB group “Search” feature.  Unfortunately, a search often does not unearth the much sought-after post.

So I decided to create this blog post, highlighting some of the posts, videos, photos, bootlegs, etc. shared in 2017.  I hope that you find it useful, but mostly I did this for myself 🙂 …..

Only a few here, because most “memorable” posts shared a video, photo, whatever.

Metter Bozze (Maarten Demetter) lit up the group when he posted “look mommy what I found” and a link to a YT video of Chris’s full show from 1991-10-08 (Nassau Coliseum, Uniondale, NY).  Thanks, Maarten!

Metter also reposted the video of Chris and the Brides of Jesus at the John Campbell Tribute (NYC 1993-08-06). Original post and comments here.  Two high-5’s to Maarten!

The first post of new member Michael Moore also lit up the group:  his almost 20-year-old video, captured from a broadcast on the TV station where he worked, of Chris singing Scrapyard and Dirt Floor.

Hiroshi also reformatted and uploaded the video of Chris and the Terra band at Rosebud Cafe Pittsburg, PA 1997-05-13.  This set had originally been on You Tube for years, but suddenly disappeared.  As this was a favorite of several ATCW members, we are grateful for Hiroshi’s efforts!

And, in a perfect trifecta, Hiroshi also posted a short clip of the Vast Combo at Quasimodo’s.

On what would have been Chris’s 57th birthday, Jeff Lang posted a video in remembrance: photos/video of the recording of Dislocation Blues with “Stagger Lee” as the soundtrack.

I stumbled across a short video of Chris’s performance at Basement Discs, Melbourne, Australia – 26 August 2003:

I shared an extracted video of Chris, recently arrived in Belgium, playing who knows what song but giving it his all.  Original post by Ozu Has (who first found and shared the video) here.

Also, don’t miss the many photos that Adrian Adioetomo shared of Chris in Sydney, Australia October 1993 (gig pix at The Basement) and in NYC 1996 (gig pix at CBGBs and The Knitting Factory).

Eleven sets added to the Chris Whitley Collection on the Live Music Archive: 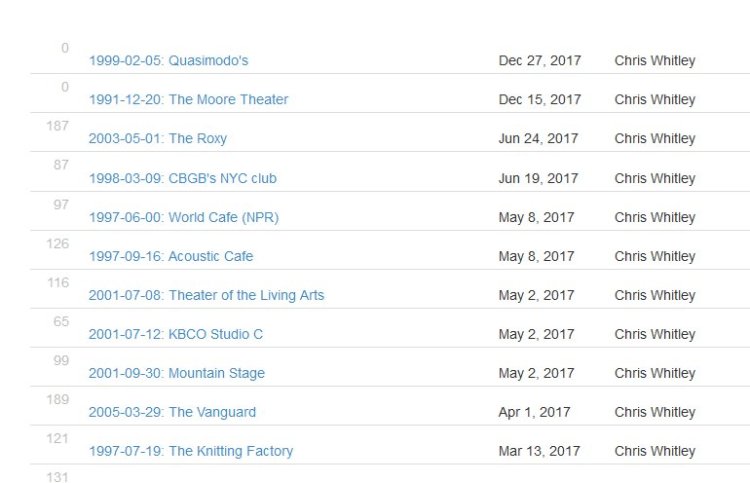 In addition, some bootlegs that couldn’t be uploaded to the LMA were made available on Katie’s cloud drive.

The full Pigs Will Fly CD

The various transcriptions, tunings, tabs, etc. of Chris’s catalog were collected in one place.