Many guitar enthusiasts have inquired about the slides, pedals, amplifiers, and other “accessories” Chris used.   yadda yadda……………..

In the Dust Radio documentary, Rick Kelly (Carmine Street Guitars) discusses how Chris made his cutaway slide from an old bicycle handlebar – an original concept which Rick notes Chris should have patented!

The photo to the left shows a brass slide embossed with a winged anvil made for Chris by Ronnie Knight, a fan and guitarist himself (also, obviously, an accomplished metal worker!).  Ronnie shared the following info with the ATCW Facebook group:

“Yes, I made the slides. I was working at Mangas Tool and Die in Muscle Shoals, Alabama when Chris and I met. (He loved the fact that I worked in a machine shop at the time of our first acquaintance; I work at NASA in Huntsville AL now.) I was doing both machining and programming at the time. I used a t-shirt with the flying anvil logo on it to model the graphic for the slide. …. I still have the hotel stationary somewhere that has the sketch and dimensions I measured off Chris’s homemade slide. I overnited Chris my last “Anvil Slide” (one I had kept as a memento) on August 1 2005, after seeing him the night before at 3rd and Lindsley in Nashville. He was trying to play with a standard slide because someone had taken his last “Anvil Slide.” When I met Trixie in Atlanta at Eddie’s Attic in Nov 2012, she really seemed excited when I mentioned making the slides for C 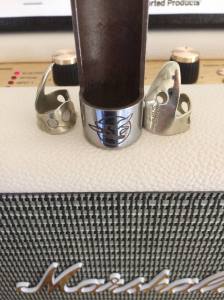 hris. She still has that last slide I sent him to help out with what would be his final few shows. He received it at a hotel desk in time for his last show at Martyr’s and thanked me profusely for sending it to him.”

As it turns out, we now know the fate of that anvil slide that “someone had taken.”  The photo on the right shows the same slide plus Chris’s finger picks, which Jay Dow ended up with when he ran the sound for Chris’s appearance at the Rhythm Room in Phoenix, AZ, July 20, 2005.  Chris left these behind when he unexpectedly cancelled the show mid-song.

Andi Lechter has written a post about these standard tools in Chris’s shed.

Nationals equipped with Barcus-Berry magnetic pickups run through a tube DI (Juice Box) and into a Fender Pro Junior amp. 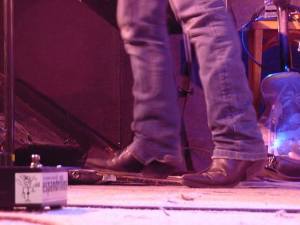 Alan Glassman Ben, actually it wasn’t a “box” it was just just a board about 1 foot long with (I think it was a 1 by) underneath it like a ramp, our sound guy played with mic placements for a while, he settled with a PZM on top. All the board had on it was black paint. I don’t know what if any effects were added to it, Chris made it sound the way it did. By the way that’s what was used on the Tom Petty tour. I don’t have to tell you the looks I got from Tom’s crew the first time I put that board on stage. LOL  When I was Chris’s tech we only used 1 PZM on the top of the board, the sound had a lot to do with his boots . 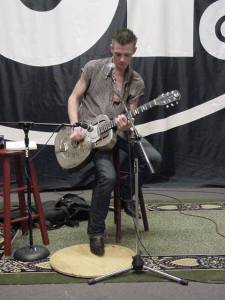 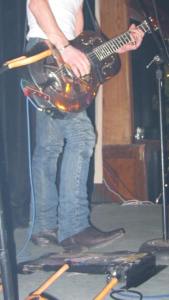 Don Weeks Looks like the one he used when I worked with him. If I remember correctly our sound engineer would place a mic on a little mic stand in front of it. I believe he used a Shure SM57.

When I find myself in a club where a singer-songwriter is playing
an acoustic guitar and intoning lyrics of desperation or unease,
I’m often uncomfortable. This is not because of the frightening,
intense emotional outpouring generally aspired to by singer-
songwriters, which is intended to prompt souls such as myself to
cower and whimper, “I can’t handle how real this is!” What I
really can’t handle is the absence of a beat, I must have a drum
or some kind of percussive element to convey an urgency that I
can feel.

Chris Whitley usually performs solo, equipped with a Dobro (a
guitar made of steel, rather than of wood), and the one thing
that makes him more compelling than 95 percent of those who
similarly present themselves: his foot. While he coaxes shivery
blues-inflected laments out of the ether and moans for redemption,
his foot is close-miked. It keeps exquisite time, definitely doing
what techno-heads call moving air. When I caught him at the
Knitting Factory a while back, Whitley would have held my
attention easily enough with his eerie, modal blues meditations,
but his big, steel-toed beat left me rapt. “Foot stomp” is
included, alongside banjo, vocals and guitar, in the credits
for Whitley’s recent, recorded-in-one-day Dirt Floor (Messenger),
his first record away from the Sony corporate umbrella. Compared
to its predecessors — Living With The Law was hampered by Daniel
Lanois’s production; Din of Ecstasy was immersed in festering
distortion — Dirt Floor is unadorned and is an accurate taste of
his live performances. Whether his foot creates a heartbeat
(“Indian Summer”) or a palpable thump (“Ball Peem Hammer”), it
ensures that a sure pulse animates even the most barren songscape.
Man cannot live by mood alone. Man must have movement.”