For Chris Whitley fans, his seen-better-days National Triolian is the stuff of legends, an icon that immediately elicits images and sounds from Chris’ musical career.  A handful of fans even have personal memories of this icon; alas, I am not one of these lucky few, but I’ve been blessed by their sharing those stories.

For example, Dan Whitley recalls how Chris came to possess this National treasure in the late 1980s.  It seems that John Campbell, a legendary guitarist himself, who lived in New York City and occasionally worked at Matt Umanov’s guitar store, was “instrumental” in this process.  John “hand-picked” it, “telling Chris it was a special one” – this via a phone call to Belgium where Chris was still living at the time, although he was planning his return to the US.  Chris trusted John’s instincts.  As Dan explains it, “Chris contacted Dad to broker the deal ahead of time.  I think Dad loaned him the dough…so that the National was waiting for him when he got here…the rest of that part is history.  Chris had a vision/game plan and faith, no question.”

Anyone who has viewed early footage of Chris or who has seen Chris play live knows how integral his National Triolian was to his sound  (see e.g., http://www.youtube.com/watch?v=VTpCr-QILpE and http://www.youtube.com/watch?v=g9KtmdAxckY – or any of the official LWTL videos).  Jeffrey Duke Patterson, a fellow guitarist and Chris’s long-time friend, states that “Mustard” (so-called because of what little mustard paint remained on it) was Chris’ “number one guitar … and played a vital role in Chris’s unique style, sound and tone.”  Patterson further notes that “Chris did things with it that went above and beyond just standard blues.  He created his sound on a National guitar like no one else has — ever!”  And “No matter what the guitar was, if Chris picked it up and played it, it sounded like Chris. His style was that distinctive.” 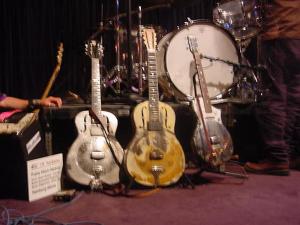 Among the many songs on which the Triolian was featured are Scrapyard Lullaby, Home Is Where You Get Across, and most of the tracks on Chris’s debut CD, Living with the Law.  Its exceptional tones can be heard on songs as diverse as Phone Call from Leavenworth and Big Sky Country.  Mustard was also a perennial on tour, especially when Chris went solo.  In fact, Chris played several National guitars, including the Style O and Reso-phonic shown in the photo at the right.  Some fans have suggested that Chris sold more National guitars than anyone – so many fans were turned onto Nationals that, as Robert DeVito – another of Chris’ guitarist friends – says, “I had some long conversations with Don Young at National guitars about a limited edition Mustard distressed to look like the original. I would buy one!”

National guitars have a long history dating back to the 1920s.  Reviewing that almost-100-year history is beyond the scope of this article, but you can find some interesting overviews here:

Suffice it to say that the first National guitars were designed to amplify sound in much the same way that Thomas Edison accomplished this feat when he invented the no-electricity phonograph.  The History and Artistry of National Resonator Instruments notes that  “The principle component of these early non-electric phonographs was a pickup head that transmitted sound from the stylus to a small mica disc. The disc acted like a banjo skin or the paper in a kazoo. It amplified the sound.”  The National website has some fascinating photos of the insides that perform this amplification trick; it’s all about the cones: how many?, how mounted?, etc.  Also peculiar to resonator guitars is their dynamic range:  the difference between the quietest and the loudest sound an instrument can make.  Unlike electric guitars, resonators allow the player to attack the strings in different ways, thereby producing different levels of amplitude. 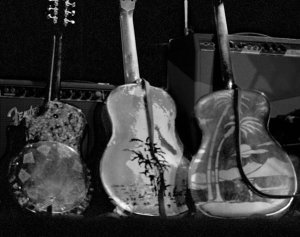 The Triolians, of which Mustard is an example, are single-cone guitars with a polychrome yellow/pea green finish and the prettiest back-side I’ve ever seen!  As shown in the photo on the left, Nationals feature sand-blasted, typically Hawaiian scenes on the rear of their metal bodies.  The next photo provides a wonderful view of Mustard’s back-side (Chris doesn’t look bad either!). 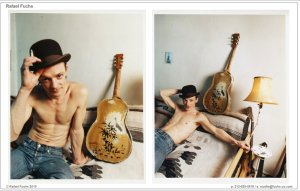 Also of interest are the strings and pickups that Chris uses on the Triolian.  According to Jeffrey Pepper Rodgers (Rock Troubadours), in 1998, the Triolian was strung with “extra-lights (.011 1st string)” — D’Addario strings, of course!   Chris’ Nationals were also equipped with Barcus-Berry magnetic Dobro pickups “run through a tube DI called the Juice Box (made by Retrospec) and into a Fender Pro Junior amp.  ‘This is different than playing totally acoustic,’ Whitley says.  ‘I can be more dynamic.  I can be quieter and louder.  I use a DI and a mike on the amp so I can push it and it’ll distort and also be clean enough to articulate.’ ”

Guitarists who have played Mustard often comment on the guitar’s feel.  Robert DeVito recalls that Mustard is “one of the lightest ones I have ever played” and that it has “electric guitar playability – except for those heavy ass strings.” Patterson also noted how Chris could “bend these incredibly heavy strings.”   Regarding Chris’ choice of unusually thick strings, Jeff Lang, who collaborated with Chris to produce the epic Dislocation Blues CD, clarifies that

The big heavy strings on his guitars came later on as the tunings got dropped to accommodate the lowered range of his voice. For example, Phone Call from Leavenworth was originally in the key of A, but by 2004 he was playing it in F# with the guitars’ tuning lowered a tone and a half.  When I first met him in 1993, his Nationals were strung with electric guitar strings that were very thin for these instruments.  If you lower the pitch like he was doing years later, the string tension would make them feel like rubber bands unless you increase the string thickness accordingly.

Sometime in 2002 – 2003, Chris damaged Mustard.  Dan Whitley recalls that Chris “smashed it against the wall and broke the neck off it.  [He] had the neck and body put back together with a new fretboard [work performed by a master luthier in NYC] so it was as good if not better than before.  It stays in tune better and seems more stable.”  Patterson noticed that, when he saw Chris in 2004 – 2005, “he didn’t have Mustard with him.   I joked that he had found another girl (the Style O) that he loved more than his ‘true love’.   And he just rubbed his hands over his face and said, ‘She’s at home, truly fucked!’   When I saw him last, which was four or five months before he passed, he was still playing the Style O instead of Mustard.”  Brother Dan offers this insight regarding why Chris adopted the Style O as his main guitar:  “Chris stopped touring with Mustard for two reasons:   #1 He wanted to keep it safe from himself (LOL), but also #2 he liked the warmth of the brass bodies plugged in better for what he was doing — mellower, jazzier, warmer vibes. He told me ‘the 29’s steel body sounds like a chainsaw plugged in.’  And I replied, ‘Sounds perfect for me!’ ”  So, during a difficult time and in need of cash to buy a plane ticket to Germany, Chris sold Mustard to Dan, albeit with Dan’s proviso that it would always be Chris’ guitar and that Chris should use it whenever he wanted.

Patterson sums up just how iconic Mustard has become:  “[I]t’s a guitar that’s so synonymous with Chris. A lot of people these days see a yellow polychrome National Triolian, and they say, ‘Hey, that’s a Chris Whitley guitar.’ ”  And Dan adds, “I’ve known and played this guitar since Chris first got it, and he wanted me to have it; he knew how much I dug it all those years. That guitar has all kinds of unbelievable history and mojo.  It has years of my brother’s sweat and blood ingrained in its thin steel body and neck; his molecules are embedded in it.  It still smells like Chris just took it off and handed it to me, and I want it to stay that way.”  Mustard now resides with Dan, who cherishes it as “something sacred” and who provided the following photo. 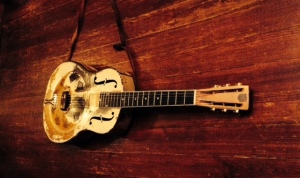 Some photos of Chris and Mustard in action: